3D projectors find extensive and across-the-board applications nowadays, including home theaters, education, industry, gaming applications, architecture, and many other areas. Even a few decades back, 3D projectors were not used extensively across different sectors of trade and commerce, but over the years, their implementation has increased tremendously. Especially, the education sector throughout the world has taken to three-dimensional projectors in a big way.

There used to be a time not very long way when 3D projectors were beyond the reach of many individuals and institutions. However, with the demand for the best 3D projectors going up consistently, their prices have come down sharply over time. Nowadays, you can buy an entry-level 3D projector at a price ranging from $600-$1050.

A 3D projector scores over a 2D model in that the former reproduces images and illustrations having depth, thereby enabling a cinematic experience. Enjoying a movie or footage at your home project by a 3D projector is almost like watching the action live. This article reviews the best five 3D projectors available in the market along with a buying guide to help you pick up a model that best fits your needs and preferences.

How To Choose The Best 3D Projector in 2021: Buyers’ Guide

Under this section, we walk you through the benefits of 3D projectors, besides offering an in-depth analysis of their essential features. The final section of this review discusses the top five 3D projector brands and models, together with their distinctive features and drawbacks.

The pictures, images, illustrations, and representations replicated by a 3D projector appear very natural and life-like as the graphics have depth. They were viewing pictures and images in 3D benefits an entire range of professionals, including but not limited to, architects, engineers, designers, and teachers. Engineers and architects can figure out in advance how the blueprint of a particular building or structure will look in real-life once the edifice is built.

Educators and instructors find 3D pictures and videos immensely helpful when it comes to explaining lessons and topics, thanks to their superior quality typified by enhanced resolution. 3D projectors also help project life-size images that causes less eye strain, and therefore more comfortable to view. Such projectors let you adjust the configuration of the illustrations, resulting in the projection of larger or smaller images.

Modern-day 3D projectors can be installed easily even in a tight space, thanks to their compactness. On the other hand, their compact size implies that you can carry them along with you anywhere you want to. To say the last but not the least, these projectors are compatible with a range of devices, including smartphones and tabs (MHL), AV, wireless, HDMI, SD, and VGA.

Take the following aspects into close consideration before making up your mind on the 3D projector you wish to bring home.

Of the three distinct technologies used for reproducing or projecting images, namely LED, LCD, and DLP, cinematic and 3D projectors mostly use the latter. DLP (digital light processing) makes use of a chip comprised of microscopic mirrors and a spinning color wheel for creating images. 3D projectors exploiting DLP technology not only reproduce brighter and sharper images but also have enhanced response time compared to LCD projectors, and can do without filters.

However, a DLP projector’s lamp life is remarkably short (about 2000-5000 hours). Viewers have reported seeing color ghosting resulting from the rainbow effect caused by the color wheel.

Another significant and distinctive feature of 3D projectors is brightness, especially inexpensive and high-end models. However, there is a limit to the extent to which you can augment a projector’s brightening capacity. Images appear more distinct and vivid if you tone down the brightness to a specific level.

Resolution implies the maximum number of pixels that can be generated by a projector for reproducing high-quality pictures, thereby making movie-viewing or gaming a pleasure.

Since there is no standardized or accepted norm for computing and setting the contrast ratio of a projector or any other projection system, there is a wide variance in the ratings of manufacturers.

The lamp or bulb installed inside the 3D projector serves as the device’s light source. Contemporary 3D projectors have built-in metal halide lamps or bulbs that use a laser or LED technology for reflecting light beams. DLP projectors, by and large, have metal halide lamps whose effective life ranges from 2000-5000 hours. LED projectors, on the other hand, come equipped with lamps that continue to emit light rays for more than 20,000 hours.

While laser lamps tend to be brighter than LED and metal halide lamps, LED lights to have the longest lifespan, and reflect colors that cause less eye strain.

The Optoma HD DLP Home Theater Projector reproduces pictures and representations having a 1920 X 1080 resolution. The 3D projector has a 3,000 lumens lamp, which ensures that projected images are incredibly bright and crystal clear. A high contrast ratio of 23,000:1 means that you’ll be able to enjoy videos and movies that appear lifelike and realistic. 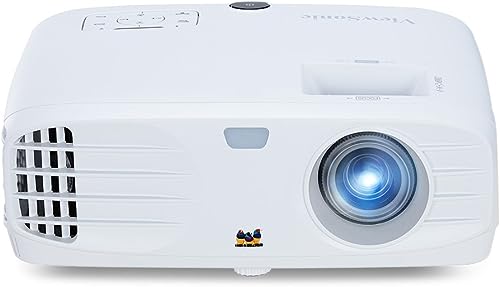 If you wish to have an unprecedented experience viewing movies at home or helping out your child with his school projects, then look no further than the 1080p DLP projector from ViewSonic. Designed exclusively for home entertainment, the PX700HD projector makes the most of full HD 1920 x 1080 resolution and a 3500 lumens lamp for projecting vivid and realistic pictures. A plush off-white framework and ergonomic design not only augments its aesthetic appeal but also makes it’s performance-oriented.

You can rest assured that the projector will reproduce stunning images and illustrations in almost any setting, thanks to its embedded SuperColor technology. Extremely low input latest facilitates unfolding of rapid FPS action while the ‘Sports Mode’ ensures the delivery of images with impressive details, thereby allowing you to enjoy dynamic sporting action. 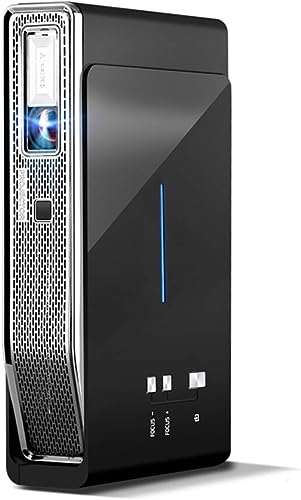 The Android Smart Projector V5 Wi-Fi Home Theater LED Portable 3D DLP Projector by Cocar features a range of versatile features that imparts a new dimension to your movie viewing or gaming experience. This 3D projector is compatible with your Android smartphone or iPhone iPad. A focal distance ratio of 1:1.19 and a 2.5m throw aspect, you can bet that projected images will be extremely lifelike and natural.

The projector is companionable with downloading application software for enjoying movies online and playing VR video games, and much more. The 3D projector supports 2.4G and 5G dual-band Wi-Fi and 4.0 Bluetooth for wireless amplifiers. The unit has one built-in Ethernet port, one HDMI 2.0 port, and two USB ports. 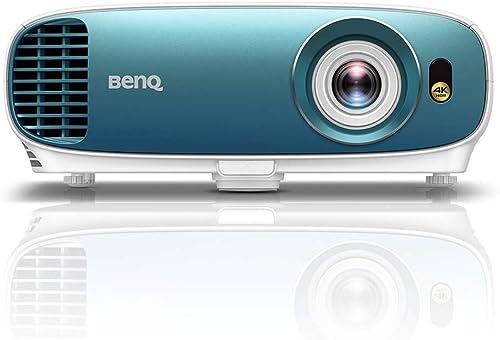 The 4K color wheel syncs with the 3000 ANSI lumens rated bulb to reproduce bright and dynamic images and pictures. You can select from five bespoke picture modes such as cinema, vivid TV, bright, sport, and football mode. The TK800 home theater projector sports a compact chassis that is also sleek and lightweight making the device eminently portable.

The Epson Home Cinema 4010 4K projector with HDR comes at a price but offers much more than what you pay for it. The projector exploits sophisticated 3LCD technology for displaying a 100% RGB color signal for every imagery frame. Thus you get to see pictures and illustrations incorporating the full-color range with seamless brightness and contrast minus image ghosting or blurring.

So, there you’ve it: five of the best 3D projectors you’ll find in the market. Every 3D projector we reviewed starting from Epson to BenQ to Optoma was found to be up to the mark for projecting 3D images. Additionally, every projector was found to be compatible across-the-board, enabling you to set up the product with mobile phones, game consoles, and media players.

Techhog.com participates in the Amazon Affiliates program – if you make a purchase after clicking a link from Techhog.com to Amazon.com, we will receive a small percentage of the sale at no extra cost to you. Thank you for your continued support!